Title: Happily Ever His

Author: Delancey Stewart
Genre: Romantic Comedy
Release Date: August 15, 2019
Blurb
Tess was used to being in the shadows. But when movie star Ryan McDonnell pulls her into the spotlight, her whole world is threatened. Can a relationship that starts as a secret fantasy ever survive in the real world?
My sister Juliet has always gotten everything she wants.
It’s fine though. I never wanted the spotlight. That was my sister’s domain. And now that she’s America’s most popular starlet? She can have it.
But when Gran—the feisty woman who raised us, and who I cannot seem to wean off video games, an afternoon doobie, or her daily Manhattan—has a huge party to celebrate her 90th birthday, Juliet brings the Hollywood madness straight to Maryland.
In the form of my ultimate movie-star crush, Ryan McDonnell. I can barely form a
sentence around the guy (at least I don’t still have a poster of him on my wall). And I definitely can’t get over the fact that he’s Juliet’s new boyfriend.
I just need to get through the weekend with them—and with the magazine people who are covering them and the party for a feature. I just need to stay away from Ryan and his warm curious eyes, his perfectly chiseled arms, and the impossibly sexy things that come out of his mouth when we’re alone together.
It’s only one weekend, and I just need to remember that Ryan is an actor. A good one. Because I almost believe him when he tells me we have a chance together.

This book is fantastic.
I admit that at first I was wary, yet I have read enough of Delancey Stewart’s books to trust that this isn’t a cheating book, which is a dealbreaker for me. Ryan and Juliet are in a fake relationship for the press. However, no one else knows that. Juliet doesn’t even want to tell her sister and Gran.
By the way – this book is a must read even if you hate romance novels, because Gran is probably the best character I have ever read. She dominates in World of Warcraft, drinks, smokes weed, curses like a sailor, and yet is one of the wisest and most insightful people. And she is 90. She is simply amazing.
Tess and Ryan had great chemistry, and I can’t wait to read Juliet’s book to experience more of this family.
Rating: ♥♥♥♥♥
ADD TO GOODREADS

Excerpt
TESS:
My sister slid from the back seat of the car looking every bit the movie star she was. I hoped everything was going to meet her standards. The security guys had looked around the property for God-only-knew what, and asked me questions about our alarm system (nonexistent), our security perimeter (also nonexistent) and our emergency evacuation CONOPS (seriously? Once they explained what a “CONOPS” was—a concept of operations, in case you’re wondering—I explained that was also
nonexistent). My big sister Juliet lived in a world I could barely begin to understand, where movie stars were people you actually knew. People like Ryan McDonnell.
Sigh. Deep, lovelorn sigh.
My sister had never really belonged here, and she didn’t fit in any better now, with her huge dark glasses and slim-fitted pink capris and high-heeled sandals. The second I saw her, I felt myself inching toward invisibility again. I loved her, but my life worked better when Juliet wasn’t standing at my side, begging the world to wonder how two sisters could be so different.
I pushed down my own insecurities and smiled at her.
“You look great,” I told her. It was true. She always looked great.
“Hey,” she said in that breathy voice she’d become famous for. She pulled me into a tight hug, smiled at me, and then took a step back, ducking her chin a tiny bit as she
said, “I want to introduce you to someone.”
A pair of long jean-clad legs slid out of the car behind her, attached to a broad tall body that I already knew too well was Ryan McDonnell. I was more than familiar with
this particular ‘someone.’ He’d been my on-screen crush forever, though I hadn’t seen him in anything lately. There had been a movie I hadn’t seen—one that hadn’t done too well, but it included zombies, which were not my thing, even if you added in Ryan McDonnell hotness.  The object of my movie star affections had bright blue eyes, perfectly tousled dark hair—cropped close now, I noticed—and a body that appeared to have been carved from stone, or so I’d thought in the last role I’d seen him in as a comic book hero reimagined as a dark avenger. God, he was hot.
“Tess?” My sister’s voice cut through my stupor.
“Sorry,” I said, shaking off the dreamy haze. “Yes.”
“Yes?” He asked me, a smile spreading slowly across the perfect lips I couldn’t stop staring at. He chuckled, and I realized he hadn’t asked me a question. Embarrassment surged inside me, making my stomach churn.
“No,” I said, covering my affirmative declaration with an equally unnecessary negative word. “Or, I … um, hello.”
“I apologize for the short notice,” Ryan said letting my idiocy slide. People probably acted like loons around him all the time. I tried not to look at him, but there were parts
of my body that were not listening at all to my brain. Ryan’s smile was like a speeding train coming right at me and freezing me to the spot where I stood, stupid and dazed. “I hope it’s not an inconvenience having us both here,” he said.
I watched his perfect full lips as he spoke, almost unable to process the actual words. I was having trouble being human, thanks to his actual existence right in front of
me.  “Sure,” I said, my voice higher than I remembered it being.
More answering questions no one asked. My sister was smiling at me, shaking her head. Juliet knew about my long-time Ryan McDonnell affliction, and it was pretty obvious at this point. I hated that she undoubtedly knew I was flustered just trying to form actual words around her new boyfriend.
I forced myself back to sanity.
“Can I help get your things?” I had no idea if it would be weird to acknowledge his status as my favorite actor or if it was rude to pretend I had no idea who he was.
I settled for a moronic silence on the topic.
Juliet put her arm around me. “You don’t need to get the bags,” she said lightly, as two of the men from her security team emerged from a second car, all black T-shirts and muscled arms pulling suitcases from the trunk. Of course not. My sister had people for that. 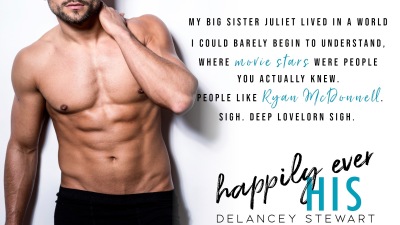 Delancey Stewart is an award-winning author who writes fiction with
humor, heart and heat!Get the first book in her new sports rom-com series — MR. MATCH — absolutely
free by joining her newsletter here: