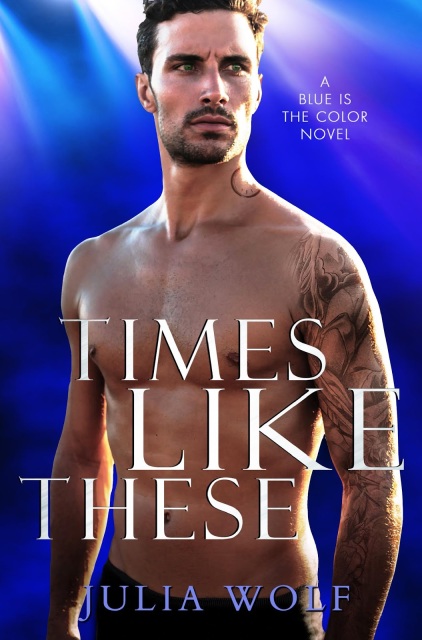 Title: Times Like These
Series: Blue is the Color #1
Author: Julia Wolf

Release Date: February 8, 2019
Blurb
Nick Fletcher has the voice of a god and a tongue as sharp as a knife.
His words can cut, and this time, his quick temper has earned him an intruder
in his life and on his tour.
Dalia Brenner looks like a grown-up Annie gone bad, but he wants
nothing to do with her pin-up worthy curves and smart mouth. His method of
dealing is to keep his head down, get through the tour, and then he’ll never
have to see her again.
Dalia has no intention of having heart-to-hearts with Nick. They share
a bus and sleep three feet apart every night, but that doesn’t mean she can’t
ignore the scowly, grumpy lead singer.
Except she can’t seem to deny the annoying instinct to “fix”
the pain and grief behind Nick’s sea glass eyes, even though she definitely
knows better.
And Nick, well, he’s getting tired of denying Dalia…period.
Dalia has plans though, and none of them involve being a rock star’s
girlfriend. Too bad Nick couldn’t disagree more.

Dalia’s younger sister is a HUGE Blue Is The Color fan. Dalia, not so much. So she’s already not happy about being at the concert that her sister spent too much money on. She does think there is something about the lead singer Nick, but before they get more than 2 songs into the concert one of the band members passes out on stage and the show is over. Dalia caught it on video, and in her anger for her sister tweets the video with a message about the musician being too drunk or high to play. This draws lots of negative attention to her, including the lead singer who simply calls her a “see you next Tuesday.” The musician who collapsed reaches out to her to explain what happened, and she goes to visit him at Nick’s house so apologies can be made all around.

The band’s manager ends up hiring Dalia for the summer since the negative attention from the Twitter scandal cost Dalia her job. Nick is not happy about it, but there isn’t much he can do except ignore her. But Dalia worms her way into the band family without even really trying, just by being herself. And ignoring her isn’t easy.

I really liked Dalia. She doesn’t fit into anyone’s box of what she should be – she looks like Annie, but has a mouth like a proverbial sailor. She’s hoping to get a job at a bank to support herself and her sister better, but is also a good web designer. She also knows her own worth and won’t accept less than she deserves, from a client or from a lover. Nick isn’t as bad as everyone thinks he is – he’s just broken. He is reeling from a tragic loss two months before, as is the rest of the band, but he feels the need to keep everyone else going at his own expense.

When these two finally get together, it’s fire. They are so good together, but they are even better after being apart. Dalia and Nick both needed to figure some things out.

And I really hope Malka gets her own book! I loved her.

Julia Wolf is a lover of all things romance. From steamy, to
sweet, to funny, to so dirty you’ll be blushing for days, she loves it all.
Formerly a hair stylist, she spent years collecting stories
her clients couldn’t wait to spill. And now that she’s writing full time, she’s
putting those stories to use, although all identifying characteristics have
been changed to protect the not-so-innocent!
Julia lives in Maryland with her three crazy, beautiful kids
and her patient husband who she’s slowly converting to a romance reader, one
book at a time.
Author Links