Title: Ruthless River
A Men of Mercy Series Novella
Author: Lindsay Cross
Genre: Romantic Suspense
Release Date: January 29, 2019
Blurb
Laney was a woman on the run. Her ex-husband, who just happened to be a cop, had a penchant for violence and, after Laney took their daughter and ran, he had a promise for revenge. She’d made a new life with a new name and had plans to stay hidden forever, but even the best laid plans go wrong… Forced to rush her daughter to the hospital Laney’s location is revealed.Laney had vowed to never seek help from a man again, until Riser’s 200 pounds
of packed muscle made her his own personal mission. He vowed to protect her and
her daughter from her ex, but could she trust him with their lives when she’d
been burned so badly in the past?

Riser Malone was an admitted adrenaline junkie whose distraction on a crucial mission last year had resulted in complete failure of his objective: protect the girl. Unable to face his failure, Riser accepted every mission put before him, but a lull in the terrorist tempo left him with too much time on his hands back home. He needed a
distraction, and he needed it badly.And that distraction showed up in the form of Laney and her daughter.

With an abusive ex bearing down on her, Riser saw his second chance at
redemption. And after one night with her, Riser knew his bachelorhood was over,
but if he ever had any hope for a relationship with Laney in the future, he’d
have to make sure her abusive ex-husband would never harm her again.

Laney is a young mom with a 3 year old daughter who is very sick. The hospital ER is denying treatment since they have no insurance. Riser is a military man – Special Forces, SEAL, Ranger, something along those lines but he’s evasive about that when Laney asks. He makes the doctor examine the little girl, who needs an emergency appendectomy. in the chaos, a nurse tells Riser that Laney didn’t fill out all the paperwork so he uses information in her wallet to do it for her, thinking he is helping. Of course, this alerts Laney’s abusive police officer ex husband to her location and all hell breaks loose.

The synopsis sounded good, so I went into this book with high hopes. Unfortunately, I was disappointed. First of all, this is a very short book. It could easily be 2 chapters of a full length novel, and honestly a longer book would have made this a better story. The entire story takes place in one evening, except for a short epilogue set 3 months later. As it is now, things get a little ridiculous.

First, though, I’ll say what I *did* like. Laney is a great mom and a fighter. She will do anything to keep her daughter safe, including going head to head with the hospital staff.

The parts I didn’t like, though? I’m sorry, but that’s a lot. The very first thing that made my mouth fall open with disbelief (in a “there is no way that would ever happen” way) was when, less than 2 hours after her daughter was rushed away for emergency surgery, then a police chase and all the fear for her daughter’s health and both their lives, Laney practically jumps Riser and they sleep together. As a mother, and one whose child had unplanned surgery, I can tell you there is no way on Earth Laney can put aside that gut-clenching fear and worry and start banging the guy she barely knows, complete with multiple orgasms. Especially since they had to run while her daughter was still in surgery and she doesn’t know how it went. Granted, they weren’t strangers, but the extent of their prior knowledge of each other was first names only, since she was a bartender in a bar he frequented. And having worked in a hospital for a very long time, I can tell you there is no way a child will be denied care in an emergency due to no insurance. It’s illegal, and a hospital that did that would lose funding. Not going to happen. My other big dislike was the instalove. It’s no secret I hate instalove, but under these circumstances it’s eye-rollingly awful. There is no way that either one of them, with their backgrounds and baggage, suddenly got over all their issues overnight, especially not this night.

Like I said earlier, if this was a longer book and the plot and characters were better fleshed out, this could be really good. But this… it just isn’t. 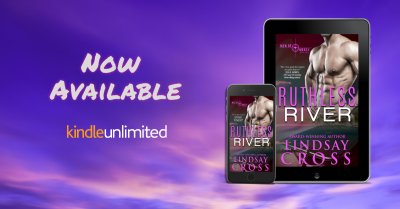 Lindsay Cross is the USA Today bestselling author of the Men of
Mercy series. She is the fun loving mom of two beautiful daughters and one
precocious Great Dane. Lindsay is happily married to the man of her dreams – a
soldier and veteran. During one of her husband’s deployments from home, writing
became her escape and motivation.