Author: Tessa Teevan
Genre: Standalone Contemporary Romance
Release Date: December 3, 2018
Blurb
The Wellington Way.
My mother’s favorite motto wasn’t something I bought into, even after watching each of my cousins fall hard and fast for their women. That all changed the night Alyssa Covington came into my life like a whirlwind, showing me exactly what I’d been missing. It took just one night for her to knock me on my ass, twist me inside out, and fall head over cock.
The morning after? She left without a second glance in her rearview mirror. Fortunately for me, her sister’s marrying my cousin, and there’s no way she can escape me now.
The only problem? She wants nothing to do with me.
Little does Alyssa know, I never give up, even if I have to fight dirty.
**
My sister told me there was nothing like loving a Wellington. I didn’t buy it. Until I found out that stranger I gave my virginity to? Shane Wellington. He’s the antithesis of my dream man, yet it took just one night for me to become addicted. Unfortunately for us, that perfect night led to a disastrous morning after and I did what I do best. I ran, fooling myself by thinking I could quickly get him out of my system.
When circumstances throw us together again, I can’t forget the time we spent together. His piercing blue eyes hold me hostage, and I know the truth. Shane and I aren’t over. Oh no, we’ve just begun. The only problem? It doesn’t matter what I want.
I can have nothing to do with him.
What happens when the perfect one-night stand just isn’t enough?
My review:
This wasn’t bad. Shane and Alyssa were entertaining when they were together. I did keep thinking that Branson, Shane’s cousin, and Ariana, Alyssa’s sister, were stealing the show and found myself wishing for more of their story (there was a lot mentioned that didn’t happen in this book and I did keep feeling like I was missing something when it came to Branson and Ariana). I did learn that their story is told fully in Conflagration, the book before this one in the series.
What I liked: The Wellington family. Alyssa’s friend/roommate Bryan. Alyssa’s relationship with her sister and Shane’s relationship with Branson. I also really liked their maturity once Shane and Alyssa finally got together. Many authors, when giving their subjects a relationship conflict, will make the characters overreact almost comically just for drama. That didn’t happen here (once they were a couple anyway) and that was greatly appreciated.
What I didn’t like: Feeling like I was missing sections of the story, when Shane and Alyssa would talk about a huge incident involving Branson and Ariana, as if it happened in this book, and not knowing what they were talking about. Also I noticed twice during the book there was sort of a recap of what had happened, as if the book had been split into small installations and then combined into one novel. It really wasn’t long enough for a “previously on…” type thing, much less twice. One other thing I had issues with was that the dual POVs weren’t consecutive. We’d read Shane’s POV and then it would switch to Alyssa, but instead of continuing it would be a retelling of what had just happened. When the scene is several pages long and a few hours in the storyline, having to go back like that was jarring. Finally, I really didn’t understand Alyssa’s open animosity towards Shane. She’s trying to stay away from him because of their jobs, and potential conflict of interest, but instead of being polite but keeping him at a distance she acts like she hates him.
Overall: Not a bad book. Not amazing, and not one I’ll reread, although I’ll definitely be checking out Branson and Ariana’s story to see what I was missing.
Rating: ♥♥♥
ADD TO GOODREADS

Tessa Teevan is a book junkie who is also obsessed with sports. She’s a research analyst by day, reads/writes by night, and is married to a guy 15 inches taller than her, making them quite the pair! They currently reside just outside of Dayton, OH with two adorably grumpy cats. If she’s not writing or scouring through tons of photos of hot men, all in the name of research, then you can probably find her curled up with her Kindle, ignoring the rest of the world. She loves her sports almost as much as she loves her books. Her other obsessions include red wine, hot men, rock music, and all things Corey Taylor. She adores hearing from readers, so please feel free to contact via any social media site!
Author Links
WEBSITE 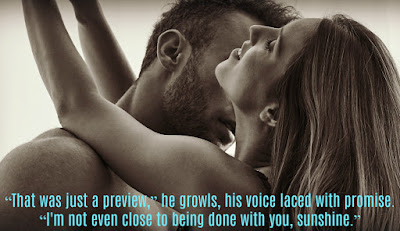