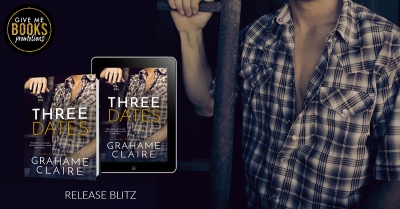 And I intended to keep it that way.

But to save my best friends’ relationship, I agreed to three with the man I secretly long for.

He doesn’t know why we can’t be. That chancing a relationship would bring everything crashing down around us.

Whatever he makes me feel is irrelevant. Wherever he thinks this may lead, he’s wrong.

That’s how long I’ve waited for her.

Despite all of my determination, each new revelation seems to pull us apart.

With everything stacked against us, we may not even make it to date three, let alone forever. 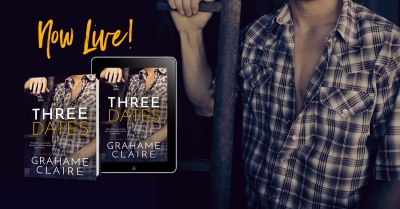 Three Dates is the sequel to It’s Not Over, although the ending of the first and the beginning of the second overlap. And while technically Three Dates could be a standalone, you definitely need to read It’s Not Over first to know what is going on and who the characters are. (Review for It’s Not Over further down in this post)

Murietta escaped a nightmare by stowing away in a shipping container to the US at age 12. Even the man who found her and took her in and became her family doesn’t know all the details of what happened to her. Daniel and his now wife Vivian are the people closest to Murietta and help keep her safe. Stone was brought into their inner circle six years previously. He is from Texas but is an A-list actor, winning Academy Awards and being named People’s Sexiest Man Alive twice. (You will probably  miss that in this book, though, as the only details given are that he’s an actor and sometimes the paparazzi show up.) He has been in love with Murietta for the whole six years, but between realizing that she was very afraid of something, and being warned off by Daniel, he holds off, just being her friend and hoping she’ll someday let him in.

Finally he convinces her to go on three dates with him (which actually happens in It’s Not Over). She balks when it’s time for the first one, so he tells her it’s “just lunch.” This becomes their mantra to get her through the various dates. She has always been attracted to him, too, but because of all her issues and fears, she won’t let anyone in romantically at all.

Eventually she realizes that it’s different with him. Instead of being afraid, he makes her feel safe. There are many many ups and downs, and once she shares the details of her horror with Stone we are all unsurprised at how she reacts to things. But they try to make a real relationship work.

Then, the thing Murietta has feared most happens.

The fallout from that event could very well tear her and Stone apart forever. Or it could be the thing that allows her to finally heal.

Rating: ♥♥♥♥ because I read It’s Not Over first so I knew who the characters are and what was going on. If I hadn’t, I would have been so lost this would have been a 2 1/2 or 3 rating.

Only 99c!
AMAZON US / UK / CA / AU
B&N / KOBO / APPLE BOOKS
Review of It’s Not Over:
I was taking notes as I was reviewing this book, as I often do because I have a hard time remembering names. A common theme to my notes for this book is “what is going on?” One thing I noted that is quite accurate is that reading this book is like sitting down with a friend to watch a soap that you’ve never seen before and not knowing who the characters are or why you should care about them. The book goes back and forth between the present, with chapters for both Daniel and Vivian, and then eight years prior, to when they met. Although at least 14 chapters in, we still don’t know who exactly these people are. We know Daniel is a businessman, although what exactly he does is unclear except that he seems to have mob ties. Vivian is his live in girlfriend of 8 years, but he’s pushing her away. He says it’s for a good reason but we don’t even know that reason until the last quarter of the book. Murietta is someone who is close to him, but we don’t know who exactly she is or why. She and Vivian become best friends instantly, and the three of them seem to have a codependency that is unlike anything I’ve ever seen before. Stone is talked about as the fourth member of their group, but we don’t know why since he’s not even in most of the book but this is where we learn about his career and the arrangement of the three dates with Murietta.
The story did get more interesting,  especially as we finally learned some details of the characters in the second half of the book. The overall mood of the book was very dark, though. Always foreboding and serious. I almost quit reading several times, thinking “why should I care about these people?” But I’m glad I finished it, because the story did improve and it was necessary to understand Three Dates.
One other note I had that bothers me about this book – in one of the flashback scenes, Vivian, and accounting intern, is given a huge promotion and opportunity, becoming the apprentice of the company’s owner himself. But in the present day scenes there doesn’t seem to be much indication of her job or what she does. There is a mention of her leaving the office at 4, but what does she do now? What became of that incredible opportunity? I do know that she and Daniel are both morally ambiguous people, although they do good things for people or organizations they care about.
Rating: ♥♥♥  I shouldn’t have to work so hard to get through a story. An air of mystery is one thing, but the reader needs *something* to be interested and to have a reason to care about the characters.

Author Bio
A writer. A blogger. United by our love of stories and all things
romance. There was definitely some insta-love. Hello? Books involved. A little
courting. A lot of writing. The result…Grahame Claire.

Soulmates. Unashamed of our multiple book boyfriends. Especially the ones
that rooted in our heads and wouldn’t leave us alone. Don’t worry.
We’ll share.

Pleased to meet you. 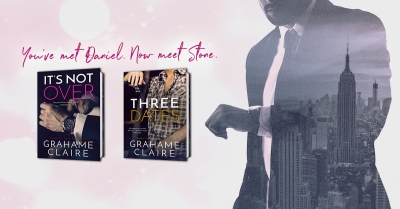