After reading Let’s Get Textual, I was certain Zoe, roommate and BFF of Delia, and Robbie, roommate of Zach, were destined to be together. I was so surprised to read I Wanna Text You Up and see that it was Caleb. But as soon as I saw that, my first reaction was “That’s perfect!”

Zoe is needing a new roommate, since Delia moved in with Zach. She doesn’t need the money, but the companionship. Caleb needs a place to live, and fast. He answers her ad, neither of them knowing who the other person is until they meet face to face.

Caleb was a great guy in LGT. He’s even better in this one. There is so much more to him than the nice guy baseball player. He has his own demons to face, but he and Zoe are good together. They balance each other out. #CalZoe just works.

As in LGT, there are hilarious parents that have enough personality to fill their own book, and pretty awesome pets.

This is a fun, engrossing read that takes us on the journey through all the butterflies of falling in love with The One, with a little Rocky Horror Picture Show thrown in for good measure.

Today, you’re getting four reviews in one! This series about the fictional Dallas Demons professional hockey team actually has five books, but I just had to stop and do this review at 4.

I randomly picked up the first book in this series via my Kindle Unlimited subscription. I can’t believe I resisted this subscription for so long! Anyway, the first book was fantastic, and all five books are in KU, so I started reading them all in order.

First in the series is Waiting for Prince Harry. Kylie is a planner. She has binders with plans for when she has a house, when she meets someone and gets married, her future career, and a binder full of magazine quizzes to “find yourself.” While at her perfect brother’s perfect wedding reception, however, she is feeling the pressure and escapes to the hotel’s bar, where she trips and literally falls into the lap of a handsome stranger, a ginger just like her dream boyfriend Prince Harry. She apologizes for spilling her drink all over him, and they end up talking for hours. She is amazed to find out his name is Harrison.

Harrison is captain of the Demons, and is used to being recognized – and used – everywhere he goes. He has learned through betrayals that he can’t trust that people like him for himself, and not what he can get for them, or give to them. He is surprised when this beautiful girl who literally dropped into his lap doesn’t have any idea who he is. They fall in love, there is a conflict, and then they both learn and grow and have their happily ever after.

The second book is The Definition of Icing. This one is the story of Nate, one of Harrison’s

new teammates that he’s taken under his wing, and Kenley, a local entrepreneur. They meet at a photo shoot for a local lifestyle magazine where they are both participating in a Valentine’s Day spread. Kenley is there to showcase some chocolates as her business is a confectionery. Nate steps in and backs her up when she’s arguing with magazine staff who want her to showcase her body more than her product. They become friends, and although they each develop deeper feelings both are scarred by past experiences and try to protect their hearts. Eventually they both confess their feelings, there is conflict, they learn and grow and have their happily ever after.

The third book is Breakout. Instead of featuring a player, this book focuses on Kenley’s 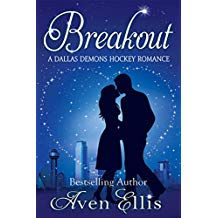 hockey loving roommate Lexi, who dreams of being a video editor of her favorite hockey team and makes her own videos on YouTube with footage she films at practices. At one practice, she is saved from taking a stray puck to the head by a hot stranger, who she soon learns is Niko, the new producer for the team. Kenley’s brother in law Ryan works for the same sports television company and had been filling in temporarily, but Niko is the man hired to fill the open position. The next day Niko calls Lexi, but to ask her to help with a rushed editing request. They are both attracted to each other, but each thinks the other sees them as nothing more than coworker or friend. Eventually they both confess their feelings, there is conflict, they learn and grow and have their happily ever after.

Notice a theme here? I understand that formulas work, and even though I adore the characters of this series – both main characters and the recurring supporting cast – I can’t stand predictability. Three books in and I can tell exactly what the conflict will be and when in the story it will happen. I also am frustrated because in each book, although Waiting for Prince Harry was not as bad, the entire issue could be solved if the couple sat down and had an honest conversation instead of each one trying to guess what the other wants and trying to protect them from their own perceived flaw.

I started book 4 yesterday, On Thin Ice. This is the story of Nate’s younger sister Holly, a

recent college graduate, and Matt, the playboy of the team. Holly is an aspiring writer with social anxiety that she hides from her family and friends, and perpetual “kid sister” in everyone’s eyes. Matt is the 21 year old player who feels that as long as he shows up and performs well in games, that he should be allowed to go out and drink and party like non-professional-athlete 21-year-olds can do. Matt and Nate have played together for two years, and Nate had always brought Matt home with him for holidays so he knows Holly too.

The book opens on New Year’s Eve, when Holly has a panic attack at a party hosted by the team’s owner, and Matt comes to her rescue and talks her through it. They end up spending NYE together, until Nate and Kenley come home and Nate jokingly reinforces the image of Matt as a player. He leaves and Holly is devastated. After he doesn’t show up for the next practice because he’s so hung over, Matt is given one final chance to turn himself around or he’s off the team. He and Holly confess to each other that they’ve been crushing on each other for the past two years, but both thought the other could never like them romantically. They start dating, but in secret. They’re both afraid of how her brother will react to his little sister dating the player. To complicate matters, Nate and Harrison want to pay Holly to essentially babysit Matt, to keep him out of trouble. She turns them down each time, but they think she’s only spending time with him at their request.

I’m halfway through this one right now, and I had to stop and take a break. As much as I’m enjoying the characters together, I can see exactly what the conflict will be, I know it’s coming up soon, and I really don’t want to live through that with them right now. I know it will end with Holly and Matt making up and having their own happily ever after (that’s kind of the point of romance novels) but after three previous books with arguments and breakups that make me want to shake the characters and yell at them to stop whining and TALK to each other, I can’t do it again today. So I’m taking a break from this one to read a different genre, and I’ll come back to it later tonight or tomorrow.

Update: The second half of On Thin Ice was better than I expected. The blowup I could see coming did happen, but it was actually handled better than the conflict in the last two books.